For this reason, many Christians don’t vote, and many vote for men and women who hold to corrupt values. And I’m sorry, but many are just ignorant of what is going on in our nation and what is at stake.

Would you feel confident in a dentist’s chair if you knew the dentist working on you was a secret murderer? Would you feel secure having open-heart surgery performed by a married man who has an affair with a new woman every other week? Would you feel warm and cozy if a pervert or a child molester was teaching or coaching your child?

Why are we so sensitive when it comes to our family and us personally, but not so much when it comes to corrupt politicians whom we endorse and vote for and will run our country amuck and make horrid decisions that affect us personally for many years to come? It has a great trickle-down effect who we vote for, especially in the 21st century where everything is so blatant and in your face now. We reached a breaking point in the last election, and we are in the time of the greatest political and moral crisis our nation has seen. Can you not see and discern that politicians are given power to make decisions that affect us personally and determine our future?

They will not only influence the way our government runs and the state of our economy and our money, but public institutions of learning and church houses are affected, and most importantly, the laws that are legislated that will either exalt righteousness or evil in our nation for many years to come.

Somebody will take your hard-earned money and use it for their ungodly agenda. Someone is already spending it and getting richer. Many who will run for office do not care about our national debt and creating another great depression. They want to give away free American citizenship, free American health care, and free education to everyone who can break through our borders. And they will make sure you pay for it. How can that not stir you to action?

Worst of all, politicians are voting on laws that will use your tax money to indoctrinate your children with homosexuality, transgenderism, socialism, God and religion. How can you continue to be indifferent?

If politicians and their political parties, the media, Hollywood, and academia can convince people on these issues, then they can convince them on anything else, including the rejection of the gospel. This is the reason many youth abandon Jesus and the church after they leave home and go to college.

Did you know, based on the politics of Twitter, Facebook, Google and other liberal and Democrat-run organizations and companies, that it’s “hate speech” if you say Islam is not a peaceful religion or homosexuality is a sin or transgenderism is wrong? But they are perfectly fine with banning Chick- Fil-A at airports or removing a monument cross or a nativity scene at a public place or just harassing Christians. Can you not see that voting for politicians with strong core moral values and truth and righteousness affects you personally, your family, children and grandchildren? But the change is gradual and so subtle, like the proverbial frog in boiling water. What one generation tolerates, the next generation celebrates. We are seeing it all around us.

Politics and politicians continually make decisions that affect these issues. If you love God and you love people, you will be passionately interested in what values and principles are being legislated by our governmental leaders. This is politics, my friends. How can you say God does not care about politics? 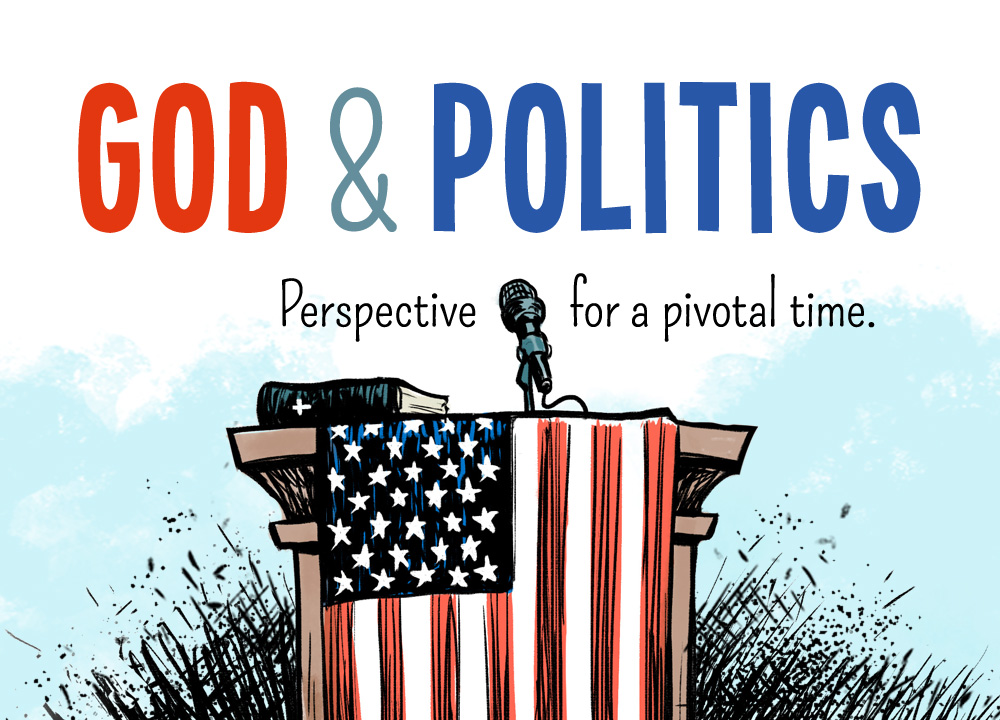 As I examine things in the political realm since Donald Trump has become president, here is something I see. In recent attempts from the Democratic Party to unseat president Trump and run him out of office, I have noticed the dominant influence of the dirtiest politics I’ve ever witnessed in my lifetime and how the FBI, the attorney general and FISA court judges all fell under the sway of this extreme avarice for political power.

We have sunk to new levels of “low” evil and the slimiest kind of wickedness and corruption when you add media power to magnify and propagate political power in order to destroy a sitting president. We have moved further and further away from the position of a party that offers to provide the best leadership to truly benefit the people into a political party that is willing to overthrow its own freedom to be in power. God help us!

We need to be praying and looking to the Lord for the best leadership for this country and stop thinking we can do this without Him. This is an early reminder to get engaged in the political process and let the Lord guide you in your vote in 2020. Look carefully at your candidate and make sure that what they stand for politically and personally is what best represents your values and the direction you want for the country.

This is not about domesticating or politicizing Jesus into our perceived “cause.” I am well aware that His kingdom is not of this world, and it is not an either-or polarity. It is a third way. But He loves righteousness and hates iniquity, and we should live the same way.

As a preacher stated recently, don’t fall into the trap of making an artificial divide between spirituality and politics. The devil is intensely spiritual, and he loves to infiltrate and possess media, entertainment, institutions of learning and politics to promote his evil cause and make the broad road to destruction even broader for our nation’s people. Let’s move toward and take the fight to him, and let our salt and light be evident in this most critical midnight hour for our nation.