The following is an end-time vision given to an established, seasoned minister of the gospel, Dr. Mark Barclay, and told in his own words. My heart was quickened when I read it and I thought: This vision needs to be circulated to the body of Christ worldwide for we are seeing the increasing effects of it being unfolded in this hour, although it was given more than 25 years ago.

If you are skeptical of these things I would encourage you to listen to your heart as you read it and allow the Holy Spirit to bear witness with you.

“But you have an anointing from the Holy One, and you know all things. … But the anointing which you have received from Him remains in you, and you do not need anyone to teach you. For as the same anointing teaches you concerning all things, and is truth, and is no lie, and just as it has taught you, remain in Him” (1 John 2:20, 27)

Here then is the vision told in the minister’s own words:

As Dr. Hagin entered the pulpit, he began to pray in tongues. When he started, I started. A moment later, I was caught up in a vision (I was told later that it was probably more like a trance). As I went into this vision, I remember how Dr. Hagin’s voice was getting quieter and quieter, until I could hear him no more. It was so quiet all around me I felt like I could hear my own heartbeat.

All of a sudden I felt evil, as if it were surrounding me. Anger rose up in me, and fear tried to get a grip on me. Suddenly, something caught my attention out of my left eye. I turned hard to the left to see what it was. I saw the circumference of the earth, from one edge to the other, and this horrible black, dark cloud was rising up over the horizon. Somehow I knew it would eventually fill the entire earth.

An alarm went off in me, screaming to me to run away from it as fast as I could. I felt like I should scream at it, to stop it in its tracks by using the name of Jesus. I began to rebuke it and started to say, “In the name of Jesus … ” I didn’t quite get it out, and the Lord said, “That will do you no good.”

The Lord said, “Son, you cannot use My name to stop what I prophesied. I am not causing this dark cloud, but I did prophesy it would happen in the last days.”

I remember in the vision that I asked the Lord “What is this? What is this evil, tempestuous, dark cloud?”

The Lord said, “This is what I showed My prophet, Isaiah (Isa. 60:1-2). This is every evil thing you can name. It is every demon, it is every disease, it is sickness and bacterial attacks that haven’t even been discovered yet. It will cause humans to do things to humans that aren’t even human. It is filled with insanity, and many people will lose their mind and their faculties. It is murder, terror, rape, abuse, terrorism, torture and much worse. It is filled with deceptions, heresies, perversions and filth. 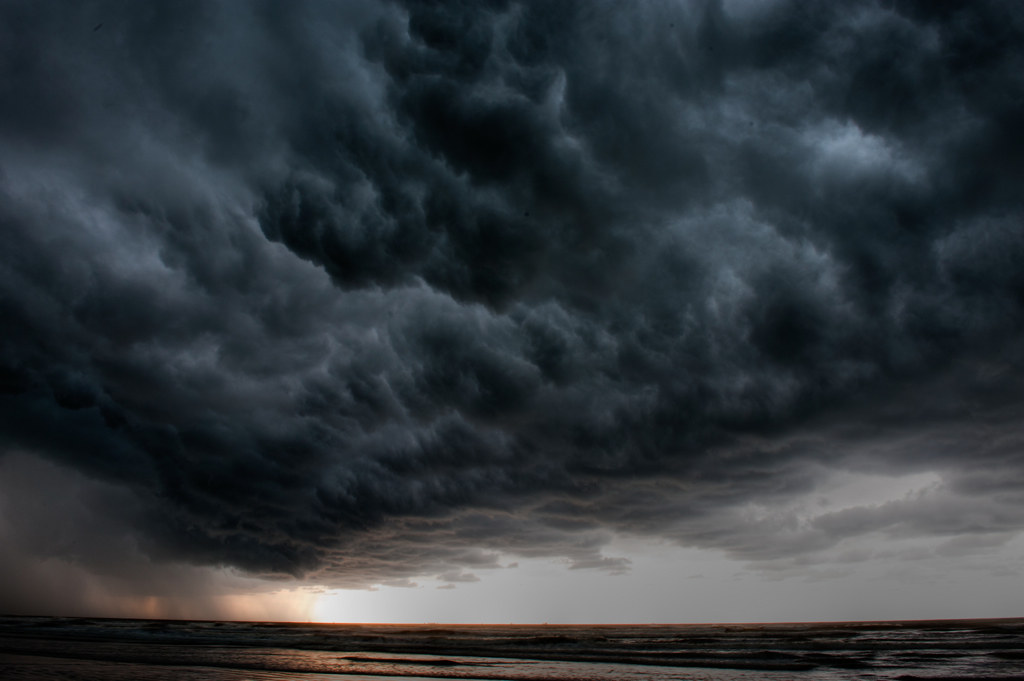 Some things the Lord showed me I have not had permission to speak.

I also saw people—many, many people. Some were running into the dark cloud, and some were being sucked into it. It reminded me of this very powerful Shop-vac I have. It will not only suck up the dirt but also my tools, if I don’t pay attention.

I saw may people screaming with terror and actually being dragged into this cloud. Though they were refusing it and resisting it with all their strength, they still did not possess the power to stop it.

I was so disturbed when I saw a cross on someone’s pocket or jewelry. I remember saying to the Lord, “Who are those people being drawn into this filth and terror, wearing the Christian symbol of the cross? Who are these people, not even resisting? And who are these people, resisting with all their might but it does them no good? They just keep disappearing into this horrible, evil cloud of gross darkness.”

The Lord answered me and said, “Oh, these are those who do not have clean hands and a pure heart. They have been warned but ignored the warnings. Some even wanted this filth as their lifestyle.”

I asked, “Well, who are these wearing the cross?”

“Oh,” the Lord said, “These are the people who claim Me as Savior. Many of them have desired this filth and even fought for it. They make excuses but are not excused. The ones who are resisting thought My prophets were exaggerating and from the old school, and they denied the warnings. Now that this evil has come, they possess little to no power, and certainly not enough to resist and overcome this horrible onslaught of enemy power. Only those with clean hands and a pure heart will be able to totally resist this. It will cover the earth.”

There was much more to this, but I began to come out of the vision and once again heard Brother Hagin speaking in tongues from the pulpit.

I asked my wife what had happened, and she said, “Nothing, he hasn’t done anything but pray in the spirit.”

Just like before, Brother Hagin’s voice got quieter and quieter until it was gone. I found myself alone again. It was so quiet I could hear my own heartbeat. Suddenly, a piercing light hit the corner of my right eye. It was so bright that I instantly shrouded my head with my hands and arms. It reminded me of the intense light that my optometrist uses to examine the back of my eyes. Actually, it was much brighter than that.

Everything within me said, “Turn and look into it. Turn now, and run into it.” Yet there was this hesitation because it was so bright it seemed to shine through me. Finally I gave in to it and looked directly at it. With both eyes I saw the depth of this bright cloud. Just like the dark cloud I had seen before, it was coming up over the horizon of the earth. I could tell that it was going to cover the planet. I just knew that I knew that nothing could stop it.

I remembered asking the Lord, “What is this? What is this massive, earth-consuming, bright cloud?”

The Lord answered me and said, “Oh, this is My glory. This is the glory cloud that I showed My prophet Isaiah (Isa. 61:1-2). This is what I promised, that My glory will fill the whole earth.”

“It is filled with the greatest miracles humans have ever seen. It is filled with healing for every disease, and a cure for every sickness. It is power to overcome sin and filth—to receive the truth and reject error, heresy and doctrines of demons. It is a full manifestation of My Spirit. It is the full anointing of Jesus Christ and more, much more.”

He showed me other things that I have no permission to speak at this time.

I saw people in this vision, just like before with the cloud of darkness. Many, many people were running into it and almost frolicking in it. It was like my first response—too bright to behold, and then I wanted to run into it. There were those who seemed to want to pull away from this glory cloud.

“Lord, who will enter into this great glory of God and enjoy this awesome power?” I asked.

“Those who have a pure heart and clean hands,” the Lord answered. “They are the ones who will escape the horrible vacuum of the evil, dark cloud and be consumed with My glory. I will require you to tell these things to My people at an appointed time.”

Now is that time! As I travel the world over, I see both of these manifestations happening. In fact, I see them beginning to intensify. Sometimes I say that both God and Satan are having a revival among men. We will now see more and more people running to each cloud, causing a great gulf or divide. Could this be the separation of sheep and goats, or the separation of wheat and tares?

You can avoid this, if you choose. If you choose not to, you will suffer the consequences. Please don’t do that!” —Dr. Mark Barclay (marktbarclay.com)