It’s difficult to believe the level of decadency we are experiencing every day in our nation. I read this article recently and was appalled by this heinous evil: Colorado Democrats Vote Down Bill Mandating Medical Care To Born-Alive Survivors Of Abortions. I will never get used to this, and neither should you, lest you become desensitized to it.

In a recent interaction with a minister friend of mine, John Fenn, he made the following insightful comments concerning the abortion issue, which he gave me permission to share.

“To me the key is our society devalued women and their ability to conceive and bear children, in the midst of women’s lib. They forgot that fact, forgot that a woman can do something amazing that no man can do — conceive and nurture a human being within her body.

“All of the natural world of higher mammals shows us the amazing thing about females: They exercise free choice up to the point of conception, but once conception happens, a deeper law comes into effect that overrides and governs her free will from that point forward: Pregnancy. It is as true of the elephant and antelope as it is for human women.

“That deeper law governs how she feels, what she eats, risks she will or will not take, her sleep, her relationships — that is a deeper law proven by the fact pregnant women do alter their behavior, submitting their will to the pregnancy. That is the deeper law, the deeper principle.

“She has, even as a newborn, her children within her. Conversely, a man can produce 100 million sperm every half hour or so, but women are special, unique, and that has been lost in the effort to gain their rightful equality in society.

“The nurturing of a human being within her body is a deeper law. Pregnancy is the law to which a woman’s free will submits. This truth is seen in mammals all over the globe — a pregnant female submits herself to the deeper (and higher) law of pregnancy. Amazing!” 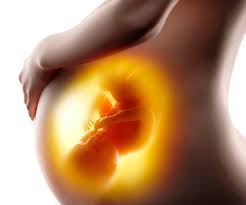 Now if you want to make a case against abortion using the Bible, following is a great reference to prove that God recognizes the unborn baby as life.

”If men fight, and hurt a woman with child, so that she gives birth prematurely, yet no harm follows, he shall surely be punished accordingly as the woman’s husband imposes on him; and he shall pay as the judges determine. But if any harm follows, then you shall give life for life…” (Exodus 21:22-23).

In Exodus 21:22-23 where the Lord gives a hypothetical situation in which two men are fighting and a pregnant woman is nearby, and in the fight she is injured and loses her baby. The Lord says if it was an accident then the woman’s husband and the judges will determine a fine and punishment, but if the man’s intent was assault, he must give his life for that of the baby’s, life for life. This proves the point that God considers the baby in the womb alive and with equal rights to those living outside the womb.