A crisis as such we’ve been presently in can make one bitter or better, more carnal or more consecrated, more earthly, worldly, and temporal minded, or more heavenly and eternally-minded.

Question: Are you closer to Jesus now than you were before this pandemic? Is He more real to you? Is the reality of His kingdom more important to you now?

Personally, I really enjoy watching sports, but I can honestly tell you that I haven’t missed them during this favorite sports season when there are usually exciting rounds of playoffs and a new season of baseball beginning. The Lord is doing a deep work in many hearts during this pandemic. The reality of Christ’s invisible kingdom is coming to the forefront of many believers’ hearts and lives.

This is one gigantic difference between the early Church and today’s Church.

“Now about that time Herod the king stretched out his hand to harass some from the church. Then he killed James the brother of John with the sword. And because he saw that it pleased the Jews, he proceeded further to seize Peter also” (Acts 12:1-3).

“And when Herod was about to bring him out, that night Peter was sleeping…” (v. 6).

Question: Would you be able to sleep the night before your execution? Peter did. Some could say that it was the gift of faith in operation, but I also believe that Jesus was so real to Peter, he didn’t care if he died and departed to be with Him. He was missing his Master.

The post resurrection appearances of Jesus to His disciples made them to know He was alive, and no longer hindered by time and space as He went back and forth from heaven and to earth and then back to heaven.

“Now when He had spoken these things, while they watched, He was taken up, and a cloud received Him out of their sight. 10 And while they looked steadfastly toward heaven as He went up, behold, two men stood by them in white apparel, 11 who also said, “Men of Galilee, why do you stand gazing up into heaven? This same Jesus, who was taken up from you into heaven, will so come in like manner as you saw Him go into heaven” (Acts 1:9-11). 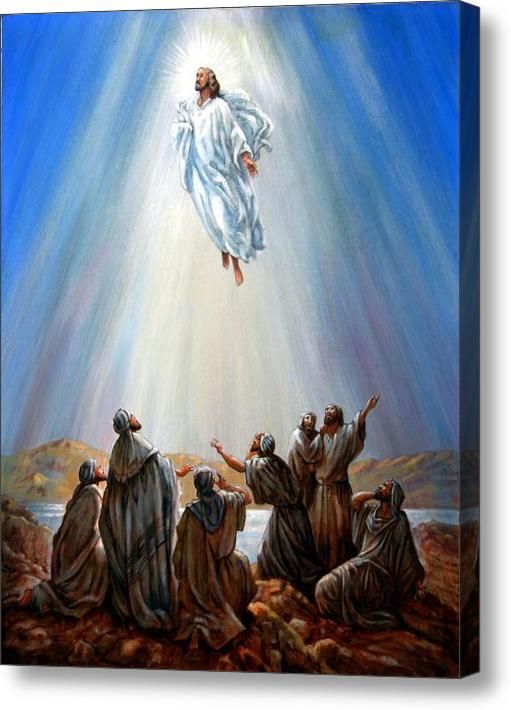 This is the same reality we’ve got to come to as believers in Jesus. When Jesus rose from the dead, the disciples witnessed the power of an endless and indestructible life. It forever changed them to fully pursue Christ and His kingdom, and be no longer bound to this world and all its’ enticements, entanglements, and allurements. This is the same journey of transformation we must be on.

Jesus as God the Son had no beginning and no end, just like eternity. Hungry and thirsty believers can access eternity through Christ who went before us as a Forerunner begin the veil (Heb. 6:19-20). How exciting!

The first Adam closed the door to the paradise of Eden, but Jesus opened it again when the veil was rent in two.

“ Now it [was about the sixth hour, and there was darkness over all the earth until the ninth hour. 45 Then the sun was [darkened, and the veil of the temple was torn in two” (Luke 23:44-45).

It’s amazing that the penitent thief went into paradise with Jesus. Jesus opened the way to a new garden of Eden.

The post resurrection appearances of Jesus unveiled a mystery to His disciples, not only that Jesus was no longer dead, but that He was now alive with access to travel between heaven and earth, with zero limitations of time and space. Jesus was giving us a peek into the eternal future of the saints, who shall live and travel in both realms.

To a measure, we can learn to live that way now in both the natural and spiritual world, because we are seated in heavenly places in Christ Jesus. Hallelujah!

And so we need not fear this pandemic or any other crisis that will come in these last days, and there will be many more, as Jesus told us. Instead, let us focus on the transformation that God wants to do in us to learn to live in two worlds—both the natural and the spiritual world. This is the privilege of those believers who are hungry and yearning to follow the pattern of Jesus, the Son of God, who lived in both worlds, even in His earth walk.

Jesus learned to walk in the NOW with His Father and we must learn to o the same—to access the realm of eternity and not be limited by time and space. Jesus is in the NOW. He is the Great I AM, and is always speaking to us from the eternal NOW. We must not relegate HIM to the future, and we must not limit Him to what He was to His disciples in His earthly ministry. We are in a different time now in the final hours of the last days. Many spectacular manifestations are just on the horizon for us—divine appearances, angelic visitations, people being translated supernaturally from one geographical place to another as Philip, the evangelist was (Acts 8), great signs, wonders, and marvels are about to happen.

Let us not focus too much on last days crisis, plagues, pandemics, pestilences, etc. Jesus said these things would come. Instead, let us keep eternity in our hearts and know that God is above time and space, and want to speak and communicate with us from the eternal now. We can experience this kind of intimacy with Him all the time, as we learn to cultivate the new garden of Eden in our hearts— acres and acres of it.

This is what it means to live our lives in Christ where we are seated in heavenly places.

May God give the reader understanding.

NOTE: Our books and articles are forerunners to the move of God, personal holiness, and the return of the Lord. The fire of God and the fear of God is attached to them. If you feel like this article is valuable, please use the social media buttons below to share it.

Also, this ministry is sustained by the freewill offerings of those who believe in the mandate and message of revival that this ministry carries. If this article has been a blessing to you, would you prayerfully consider making a tax-deductible contribution through our Paypal button to help?