No Christian in this country is under the threat of death or imprisonment for preaching the gospel. No one’s life is in danger. No one is being beaten, flogged, or hardly even threatened. No one is suffering for the sake of the Name of Jesus in the same way the early disciples did. Why then is there such a passive posture and a cowardice in the Church when it comes to standing for truth, righteousness, and morality in our culture? Why are there so few who are rocking the boat of our sinful, wicked, immoral culture?

Jeremiah said it this way:

America is still virtually a land of peace, but Christians are slumbering and weary with the weights and cares of the world. What would happen if overnight we were raided by radical terrorists who demanded we deny Jesus and join their religion and cause or be executed? What if there was a foreign invasion or military coup from insiders and our government was suddenly taken over, and a new antichrist government was established–and all our freedoms were taken away? It’s unlikely at this point, but what if?

C’mon folks, let’s be real. Our brand of Christianity here in the West is soft, weak, anemic, and nearly good for nothing.

We resemble the church of Laodicea who boasted in their supposed blessedness and wealth when Jesus called them wretched, miserable, poor, blind, and naked.

“Because you say, ‘I am rich, have become wealthy, and have need of nothing’—and do not know that you are wretched, miserable, poor, blind, and naked…” (Rev. 3:17)

Many Christians are terrified to stand against the sins of our culture and just tell others it is wrong. In fact, some professing Christians will actually celebrate those sins with the world. They will march in gay pride parades because they say God is love. They will rally for women’s rights to abortion because after all, it’s their bodies. They will say that fornication, adultery and every form of sexual immorality is none of our business, and that we shouldn’t judge and yada, yada, yada…

Adding to their moral cowardice and complete ignorance of Biblical standards, these passive Christians will defend their personal Jesus and tell them He loves them and understands them. How despicably immoral that is in itself! How grossly deceived they are! How spineless and yellow-bellied these professing Christians have become! They’ve been conformed to the culture and a Jesus they’ve created in their own image (The Real Jesus), instead of being conformed to the Biblical Christ. This makes them twice a child of hell than the sinners who commit such sins.

I am not saying that our primary responsibility as Christians is to attack the sins of our culture, but where in our society are Christians standing against sin and immorality? The world holds up their poster child of sin and we applaud them or remain silent. Where is the opposition? Where is the resistance and defense of the truth? Where is the stand for righteousness and morality?

I am also not saying that our refusal to denounce sin is our greatest problem, but how long will morality and truth continue to give way to an ungodly and evil agenda in our nation? Our faith is either being kicked to the curb, placed in the corners and fringes of society, or just being denied by so many who remain passive and neutral. We’ve allowed our faith to be cut off from normal life and relegated to our church sanctuaries. In a word, we’ve been silenced in the public arena. We are a large consensus of Christians who are actually helping our culture build an atheistic society. And we use the secularism in our culture to be secular ourselves. They have influenced us far more than we have influenced them.

There is very little evidence of Christianity in our American culture, and it’s our fault. It is time to heed the Lord’s admonition to Joshua. 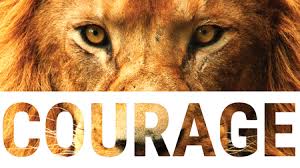 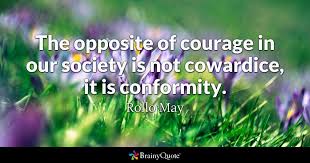 Because of our lack of backbone and courage American Christianity is falling off the cliff. We are going the way of the dinosaur if Christians do not become stronger and more courageous in their faith and convictions. We are living in a very pagan culture right now in our nation. Things are so much worse than they seem. The vices, the bondages, and vile filth in our culture is expanding at an overwhelming pace. The Church is to be the conscience of the nation but our conscience is seared right now.

Our brand of Christianity is lame. It is seen as a nice religion of nice people. There is a wholesome fanaticism that is missing. There is a life and a vibrancy that is lacking. We are too passive and too wimpy. If we want to change our culture we must come out of our closet of fear and intimidation. We can be loving and fearless and courageous at the same time.

Honestly, we have no need to be fearful and intimidated. As I said, no one is being threatened with their life. No one is being killed for their faith. So what are we afraid of? The rejection of men? Who cares! Is that really going to matter in the end? There are plenty of others who will applaud you and wax courageously because of your example to stand for truth, righteousness, and morality, and share the gospel of Jesus Christ. And God will give you wisdom and grace to love even our enemies.

Let the change begin with you. A little courage will go a long way. And if enough of us wax strong in the Lord and stand tall and courageous we will in time see the change our hearts are longing for.